With inflation surging, many families are getting more selective about how they spend. Private equity funds and others looking to acquire companies that make or sell products for consumers are getting choosier for much the same reason.

Acquirers are prioritizing deals for companies that make staples that consumers must buy over the sort of discretionary products that are dropped as times get tough.

“We’re seeing two kinds of deals,” said Ben Rudman, co-CEO of the Charis Consumer Collaborative. “There are high-quality companies with data points proving resilience and long-term tailwinds. And there are low-quality companies either seeking to exit before things get harder or have some sort of liquidity crunch necessitating a transaction.”

Lenders, too, are becoming more cautious, scrutinizing the financials of prospective deals and insisting on lower leverage. The result, according to leading lower middle market dealmakers, is that consumer deals are still getting done, but sellers are attracting fewer bidders than in the post-pandemic frenzy of 2021.

“Everything has turned around,” says Brent White, Vice President at Gauge Capital. “Last year was a seller’s market. This year is a buyer’s market.”

Deal activity for consumer-related companies continues to be brisk on the Axial platform. In the first half of 2022, activity increased by 41% from the same period a year earlier. Indeed, the pace hasn’t slowed any from 2021, when deal volume also rose by 41% over 2020, despite the pandemic disruptions. 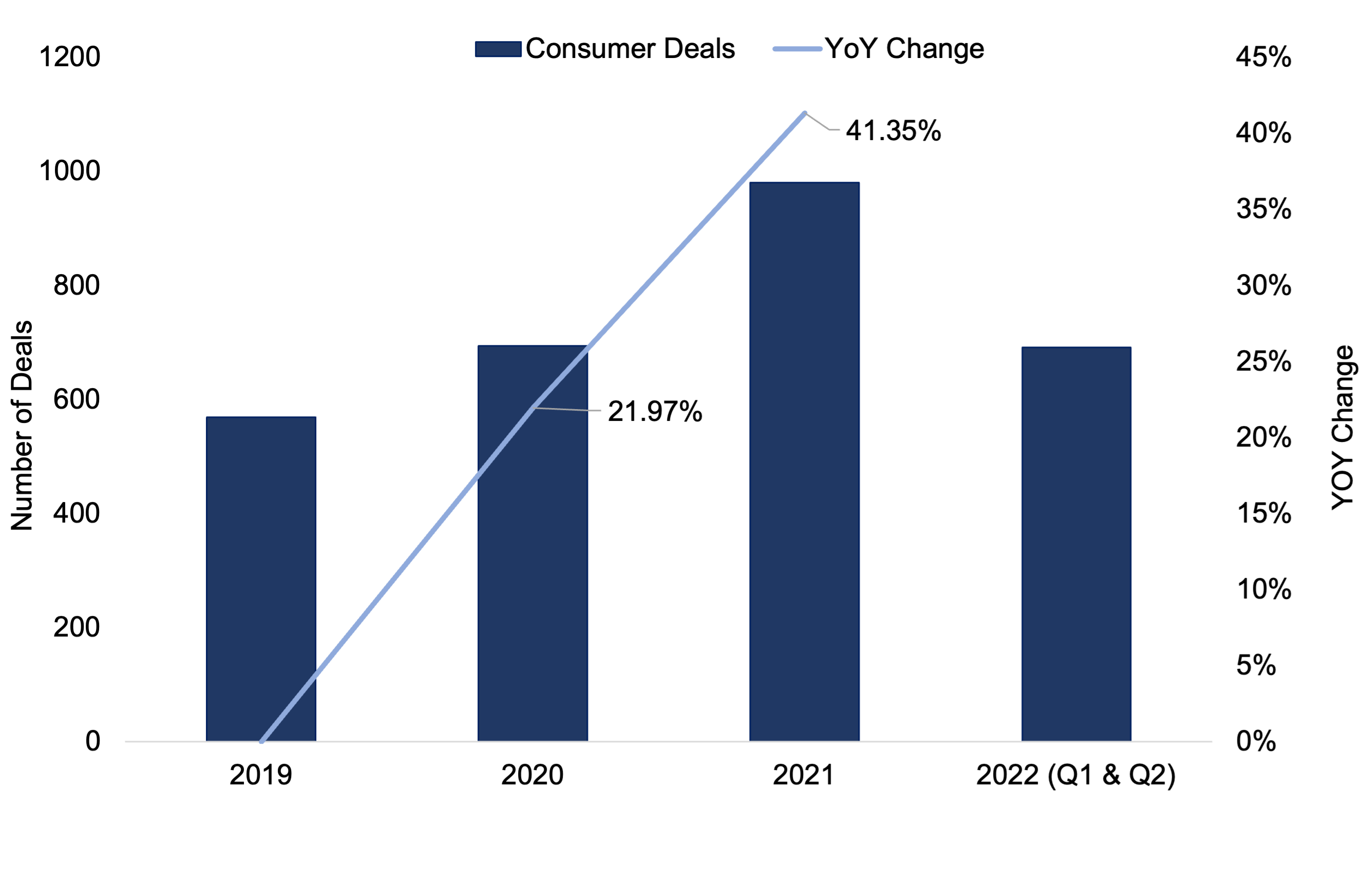 In this report, we’ve identified 50 of the top consumer-focused private equity firms and M&A advisors. (See the methodology section below for our criteria.) We’ve also asked leaders of more than a dozen of these firms about the trends they see in the market. This report includes seven of them: In the consumer space, as in most industries, the underlying driver of dealmaking is a large pool of private equity looking for investments. Existing consumer companies, many of them backed by private equity, are also looking to grow through acquisition. Both groups, our members say, are scrutinizing deals more carefully.

Many financial investors have paused to understand consumer behavior in the current economy and figure out how families are most likely to spend money over the next few years. A warning came in second-quarter earnings when both Walmart and Target resorted to heavy markdowns to clear unsold inventory.

“When you see big retailers have a glut of inventory, it gives you pause about the growth trajectory for many companies moving forward,” Bohlender says. “Value comes down to consistency and growth potential.”

Compounding the slowdown in consumer demand, consumer companies are finding online marketing is getting more expensive and less effective. New privacy protections at large technology platforms is limiting the sort of targeted advertising that marketers have come to rely on in recent years.

Financing: No more funny business with the bank

The banks are also becoming more skeptical. Many are less willing to take risks, forcing financial investors to put more equity into deals. Not only are they limiting loans to a smaller multiple of EBITDA, but they’re also scrutinizing the income statements those multiples are based on.

“Last year, bankers were willing to accept things they didn’t totally believe in so they could win a competitive process,” Bohlender says. “Now they are not allowing funny business to slide.”

Not surprisingly, then, acquirers are putting a premium on companies that focus on recession-proof staples rather than luxuries and discretionary purchases. Established brands and diversified product portfolios are more attractive in this environment than upstart challenger brands. And so are companies with domestic manufacturing or at least a diversified overseas supply chain.

“Buyers are focusing on acquiring “A” assets,” says Mitchell. “They are not as interested in mid-grade quality companies or buying brands without much existing management talent.”

Finding the A assets, however, is harder than ever. Buyers are struggling to make sense of company financials, which have been buffeted by the pandemic and the subsequent rebound. When they do the work to sort through the cross currents, a lot of consumer-focused companies show signs of weakness.

“We’re not seeing as many deals coming through the pipeline as we did last year, and the quality has gone down,” says White. “Every deal has a story. Their margins are down. They have problems with customer concentration, supplier issues, labor shortages, and consumers trading down to lower priced items.”

Sellers: Choosing whether to bail out or dig in

All these challenges are taking their toll on small business owners. Many are deciding that it’s time to get a larger partner or exit entirely.

“We are also seeing ownership in well-performing companies getting nervous about where the economy is headed over the next few years and looking to take some chips off the table now instead of risking another choppy few years,” Stump says.

Those that aren’t doing as well are also looking to sell, he adds. “Unfortunately, the macro-economic turn over the last three to six months is producing more distressed situations. We are working with some brands that had planned to fundraise this year that now are running into headwinds in the VC market. They are looking for an earlier strategic exit than initially expected.”

In many cases, those exits are at lower valuations than sellers had come to expect. Deals that might have attracted six to eight bidders last year may only get two or three now, advisors say. So there is less pressure to push up multiples.

“There were some outsize prices paid last year,” says Willert. “It’s not like people flipped off a light switch and aren’t going to transact. But there is less exuberance, and prices are down on the order of 10% to 20%.”

There are several ways that business owners react to falling valuations. Some are holding out. “Sellers are not going to price their life’s work against recent global events,” Rudman says. “They hope someone sees the value they’ve built. Since buyer expectations have changed, the bid-ask spread is wider and fewer deals are closing.”

Those holdouts are more than offset by others who want to sell before things get worse. “The people bringing assets to market are trying to catch a tailwind,” Gauge says. “If they can’t get a 13 EBITDA multiple, they want to get close to 12 or 11.5 before things really fall.”

Within the consumer sector, there is a striking difference between the sort of companies that buyers are looking for and those exploring a sale, according to data from Axial. Buyers are mostly seeking companies involved in manufacturing (42% of activity over the last 18 months) and services (24%). Companies for sale are mostly in retail (42%), along with distribution and wholesale (27%). There is little inventory in the sectors buyers want most: only 20% of seller activity is in consumer manufacturers, and 1% is for services companies.

Advisors say that buyers are trying to identify product categories that will remain strong even if the economy slows. For example, Gauge Capital is particularly interested in contract manufacturers and those that make private label products for retailers, White says. These should benefit from the interest of companies to build up a domestic supply chain as well as the shift by consumers away from higher-priced brands.

Gauge sees opportunities in plant-based foods, which is riding a long-term trend, and infant apparel, which is largely recession-proof. It’s less enamored with more discretionary offerings like massage and skin waxing providers. At Heartwood, White says the fund is less interested in products used by homebuyers, the expected slowdown in residential real estate sales prompted by rising interest rates. Similarly, it is shying away from categories that surged in the pandemic, such as outdoor furniture.

The M&A market for consumer-focused companies reflects the overall economy: uncertain. With doubts about the future of retail spending, potential buyers are becoming more selective, looking for companies with products and business structures that could withstand a sustained bout of inflation, a recession, or both.

Lenders are also getting pickier about the deals they finance and the amount of leverage they will allow. All this is lowering the prices acquirers are willing to pay.

Sellers see the same trends. Some are rushing to get out before things get worse, as others dig in and wait for values to rebound. The net effect is that total deal volume is continuing to increase in 2022 at the same pace it did in 2021.

“The last 12 months in consumer have been characterized by cost increases and availability challenges,” Rudman says. “The next 12 will be marked by volatility and an inequitable distribution of fortune and misfortune..”

Axial’s Top 50 consumer list was generated based on a weighted formula leveraging private transaction data from the Axial platform.

Metrics in the formula include: Automation Is Coming to Your Machine Shop. Are You Ready?