For private equity firms, filling out the ranks at portfolio companies with top-notch talent is more crucial than ever.

There are a few things to consider when it comes to ensuring that the right people are in the right seats.

According to Bain & Company’s 2018 Global Private Equity Report, “Hesitation…can be a major source of value loss, as it too often results in unplanned replacements to course correct for suboptimal performance.” The reasons for this hesitation are understandable. There may be an impulse to let the current leadership team prove themselves post-close, especially since the PE firm has likely developed relationships during the deal process. After months of courting, it can be difficult to shift from “‘wooing’ mode to ‘operator’ mode post-close,” notes Bain.

Their report also found that viewing recently acquired companies through rose-colored glasses is all too common among PE firms. In an analysis of deals that ultimately ran into trouble, private equity’s pre-close management assessments rarely identified red flags (see graph below). 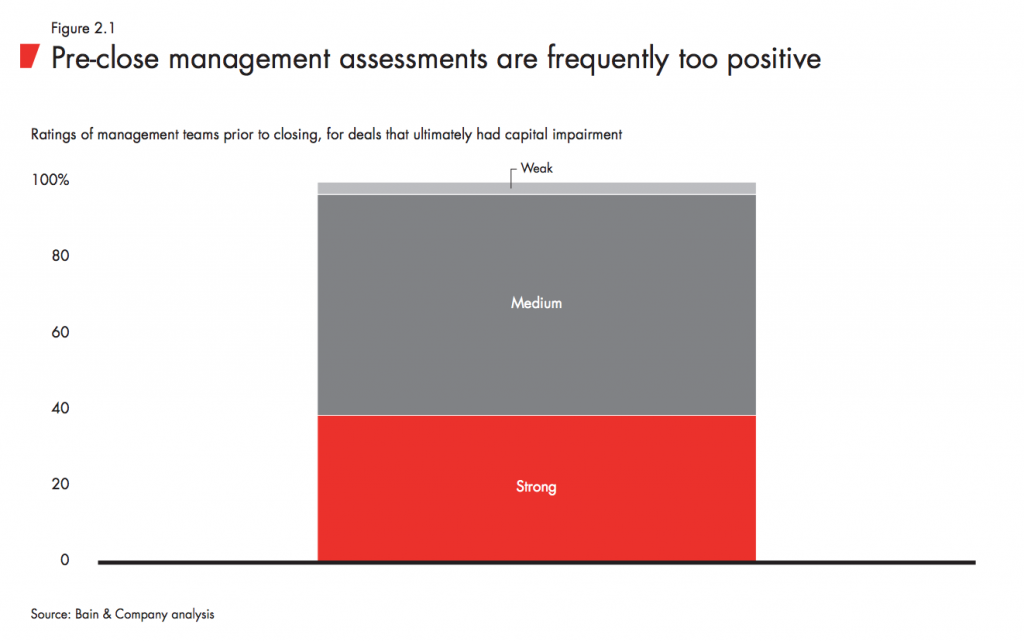 There’s no one right time to flesh out a leadership team or replace key members; the answer will be different with every portfolio company. But the more carefully a fund can scope out a team and think about its future before the deal closes, the better.

“Most private equity funds go into a deal really hoping to be able to keep the existing team in place. Not only is changing horses midstream disruptive, but you also want the people to succeed. But it’s important to keep in mind that there are different people who are good in different sizes and stages of companies. For example, if your goal as a PE firm is to professionalize a business, it may be hard for the founder to cross that chasm from an entrepreneur-run business where they’re less structured and A/B testing every day,” says Mooney. Being realistic about necessary changes in advance makes it easier to move swiftly when the time is right.

Bringing in consultants or implementing assessment frameworks can provide helpful structure when it comes time to make people changes.

“Assessment methodologies range from a high-touch, bespoke process at one end of the spectrum to a fully standardized and automated process at the other,” reports Bain. The former may require a bigger spend upfront as well as dedicated consultants (or in-house experts) to research and conduct interviews, while the latter is often less expensive but should be taken with a grain of salt as it may not be entirely comprehensive or applicable to every business or role. Either way, human judgment remains paramount: “neither [approach] eliminates the need for reference checks to validate assessment findings and lower the risk of a mis-hire,” cautions Bain.

Private equity firm Evolution Capital Partners uses a tool called Kolbe, which measures how people are most comfortable solving problems when they are free to be themselves. Kolbe identifies four different “Action Modes” — Fact Finder, Follow Thru, Quick Start, and Implementor — and three different tiers of each type (high, medium, and low). “What Kolbe wants to see is a balance of people with skills in each of the 12 resulting segments, with the belief that you’ll get to a better answer faster with less energy expended” than if you have individuals who are too similar to one another,” says Jeffrey Kadlic, co-founder and managing partner at Evolution Capital Partners.

Certain Kolbe types tend to work best in certain roles. “We look for certain things as we build teams,” says Kadlic. For example, he finds that controllers or CFOs tend to be high Fact Finder and Follow Thru — signs of a good strategic planner. Evolution Capital uses Kolbe both to evaluate the current team at a company as well as to provide another data point when interviewing new candidates. “We have people submit resumes and take the Kolbe before the interview. The Kolbe is an extra screen.”

“Smart private equity people are not just focused on the top three or four executives, like they have been historically. They’re recognizing that they have to enhance training and be aware not only of middle management as well but also how people are being treated further down the line,” says Kadlic.

“Increasingly, new data sources and analytics tools allow suitors to take a much deeper look into an organization than ever before,” reports Bain. They detail one example in which a potential acquirer of an industrials company used web-scraping technology in order to figure out why the company’s sales team was underperforming compared to its competitors. The tool found that “the competitor hired younger, more aggressive sales types who were good at hunting for new opportunities and adept at selling a diverse set of products,” while the target company focused on hiring individuals with deep product knowledge and less extensive sales expertise.

With this insight, the potential acquirer was able to create a clear roadmap for success — “either hiring more aggressive sales specialists or creating an analytics team to generate more and better live leads for the company’s engineers-turned-salespeople.” Without this information, the strategy would likely have been to simply replace the sales executive in charge — which may or may not have solved the problem.

Shifting from outsourced to in-house talent can be an important step for portfolio companies at a certain stage of development. Evolution Capital Partners focuses on investing in small businesses — “companies that may have been around for 15 years and are profitable but haven’t yet taken their business to the next level,” explains Kadlic. Bringing in specialists is crucial for these evolving businesses. In the leadership suite, this may mean bringing on a CTO or CFO, but there are also roles to fill in the middle and lower ranks. For example, “In a regulated industry, bringing on in-house counsel is an important consideration. If the company is using outsourced technology, bringing one or two programmers on board can be a necessary step,” says Kadlic.

Identifying which roles are most critical to a specific company’s success at a given moment in time is crucial but difficult. According to Bain, there are two questions at the heart of this discovery: “How important is the role to the overall value of the business?” and “How much does superior individual performance contribute to success in that role?” Often the roles require customer interaction and quick thinking that can’t be replicated without the right mix of intellect, personality, and experience. According to Bain, the most successful organizations “don’t necessarily have more A-level people, but they are relentless about deploying them in the roles that are critical to the company’s success.”