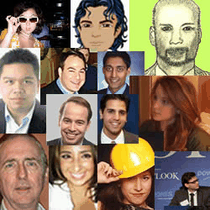 The private capital markets are a very different beast from the public markets. There are no reporting requirements. No ticker showing the immediate value of your portfolio. No insider share moves to indicate impending doom. Everything is a riddle wrapped in a mystery inside an enigma. The corps of journalists covering the private markets make a heroic effort to find out what matters, and to analyze it and share with us the news that we need to make decisions every day.

The team here at Axial (with input from @pe_feeds) spent the last few weeks culling through news articles and talking to everyone we know in order to compile a list of 28 journalists you need to follow to stay current on what’s happening in the private markets. The list is much too big for one post, so we’re breaking it in two. Today we’re looking at the 13 jounalists who do in-depth analysis of the markets or who are just starting to hit their stride:

Dan Primack
Dan is the consummate private equity journalist. He launched both peHUB.com and the peHUB Wire email service while at Thomson Reuters, and he now writes his daily Term Sheet for Fortune. It’s a critical read which gives his classically snarky take on private market topics that range from seed-stage investments to private equity mega-buyouts. He’ll cover anything, and offers a point of view that few others will. When you want to read beyond just the headline, read Dan Primack. Follow him on Twitter @DanPrimack.

David M Toll
David Toll leads the team that produces Buyouts Magazine, writes for peHUB and manages the Buyouts conferences throughout the year. He’s one of the grandmasters of reporting on private equity and leveraged buyouts. While he doesn’t produce as much content as some of the other journalists featured on this list, what he does publish tends to be important to understanding where the industry is headed. Follow him on Twitter @DavidMToll.

Steve Bills and Gregory Roth
Bills and Roth are the dynamic duo who cover pensions, fundraising, private equity and leveraged buyouts. Roth breaks news on who is investing in newly-raised funds, while Bills analyzes what’s happening in the industry more broadly. If Toll runs the Buyouts machine, these two are the heartbeat that keeps it going. Much of their work is behind a paywall, but it’s very good. Follow them on Twitter, @Steve_Bills and @RothReuters.

Cristina Alesci
Alesci is a force to be reckoned with. By breaking the news of some of the largest buyout deals in recent memory, landing interviews with major players like Kravis and Rubenstein, and covering the collapse of MF Global, she’s made a name for herself at Bloomberg TV, Bloomberg News and Businessweek. Not bad for someone who worked at a law firm and Pfizer before becoming a journalist. Follow her to get the latest on the biggest stories happening in the private markets. She’s on Twitter @CristinaAlesci

Peter Lattman
Although Peter Lattman specializes in legal reporting and white-collar crimes, he lends valuable insight and analysis about Wall Street and finance on DealBook. Before moving to the New York Times in August 2010, Lattman was a reporter with the Wall Street Journal, where he focused on legal and private-equity issues. His consistently strong output will benefit any reader. Follow him @peterlattman

Jonathan Shieber
A journalist for Dow Jones, Jonathan Shieber covers private equity and venture capital for the company’s Private Equity Beat. His articles appear at least twice daily, and keep you on top of the latest private equity news. You’ll also see Shieber regularly interview some of the biggest names in the industry at conferences and panel discussions. Follow his updates @jshieber

Hillary Canada
As a reporter for Dow Jones, Canada contributes to the Private Equity Analyst, the Private Equity Beat, and to WSJ Morning Leverage. A “bluegrass born and Texas bred” writer, her distinctive analysis of the industry is worth following. Find her on Twitter @H_Canada

Simone Foxman
As a reporter for Business Insider’s Money Game vertical, Simone Foxman is focused on European financial affairs, and particularly the eurozone crisis of late. Her frequent and pertinent articles will be valuable to anyone impacted by the European financial markets. Simone is a recent graduate of Columbia University and has a promising future. Keep an eye out for her. You can follow her on Twitter @SimoneFoxman

Devin Banerjee
Banerjee, our second up-and-comer, is a Bloomberg News reporter with a particular emphasis on private equity and deals. Already an accomplished journalist – with articles appearing in the Wall Street Journal, the San Jose Mercury News, the JoonAng Daily, and the Stanford Daily (where he served as president and editor-in-chief), Devin delivers new regularly. Follow him @devinbanerjee

Tara Lachapelle
A “perpetually curious writer, finance geek, news junkie and sangria aficionado”, Lachapelle writes for Bloomberg’s daily Real M&A column, and is our next up-and-comer. Her consistent reports make her a reliable source for energy and industrials deal activity. Follow her on Twitter @taralach

Anousha Sakoui
As the resident Londoner on our up-and-comers list, Sakoui’s coverage of M&A for the Financial Times has a slightly different ‘flavour’. Her reporting for Alphaville centers on CDS; her reporting on M&A and podcasts is strong, but is hidden behind the impenetrable FT paywall. Follow her on Twitter @anoushasakoui

Anthony Noto
Our last up-and-comer spotlight shines on Anthony Noto, a reporter for Mergers & Acquisitions Magazine and editor of themiddlemarket.com. A self-proclaimed “Spartan in training”, Anthony Noto delivers some powerful news. His most regular articles are ‘Today’s Transactions’, in which Noto highlights some of the day’s most notable deals. If you are looking to stay up-to-date on deal activity, he is a reliable source. Follow him on Twitter @Noto1031

Tomorrow we’ll continue with the other half of the list. We’ll be looking at journalists who are breaking deals all day long, who keep us in the loop with daily summary emails, and journalists who are focused on interviews of industry luminaries. UPDATE: Click here for the lastest article.