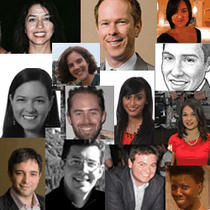 And now, for Part 2 of the list of the journalists you need to follow to stay current in the private markets. As we said yesterday, we’ve spent the last few weeks working with @pe_feeds and combing through news sources, daily updates and online magazine to find the journalists that will keep you on top of every change in the middle market.

Yesterday we published the list of 13 journalists who focus on in-depth analysis or who are just getting started. Today we’re featuring the 15 journalists who spend their time breaking news by finding the companies for sale or who have recently closed deals, do video interviews of the biggest names in the industry, or give us daily summary updates so we don’t have to read every article all day long.

If you think we’ve left anyone off the list, leave a note in the comments section. We don’t claim to know everyone in the private markets and would love your suggestions. Here’s the rest of our list:

Jon Marino
Marino left his post at what is now Mergers and Acquisitions to became the editor of peHUB after Dan Primack’s departure to Fortune. His First Read emails/posts are a must for anyone trying to stay abreast on private equity and venture capital trends without sacrificing an entire morning to the cause. If you attend any of the peHUB or Buyouts events you’ll see him moderating panels and offering his opinion on the private markets. Follow him on Twitter @JonMarino

Luisa Beltran
Luisa follows Jon every day with the peHUB Second Look. Coming out in the mid-afternoon, the Second Look is the online version of an old afternoon edition newspaper, but specifically for private equity. Never miss a big story no matter how busy you get. She also writes solid articles on various private equity and venture capital topics. Follow her on Twitter @LuisaRBeltran

Jen Rossa
Rossa edits the Private Equity Bloomberg Brief, a daily newsletter that collects the best of private equity news. The newsletter is a subscription service, and full of information that can change your day. Fortunately, she shares many of the articles on Twitter, as does Sabria Willmer (@swillmer) who also contributes to the Brief consistently. Follow Jen on Twitter @JenRossa

Mike Wursthorn
Wursthorn breaks news on closed deals all day long. He covers acquisitions, portfolio exits and companies up for auction for the Private Equity & Venture Capital section of Dow Jones and for the Wall Street Journal’s Private Equity Beat. If you want to know when a deal is being finalized, follow Mike. You can find him on twitter @4BetterOrWurst.

Chris Witkowsky
Chris is the editor of Private Equity Online, a paid news source covering major moves in the private markets. He describes himself as a “journalist covering private equity and looking for skeletons.” We’re impressed by the sheer volume of his output. While much of his writing is behind a paywall, the bits that are available for free are worth reading if you want to stay current on pensions, fundraising, and the deal business in general. Follow him on Twitter @ChrisWitkowsky

Michael de la Merced
Michael has worked as a major reporter for The New York Times and DealBook for the past six years, covering mergers and acquisitions, bankruptcy/restructuring, and private equity. Much of his work lately has been focused on tech and healthcare, so keep tabs on him if these are areas of interest for you. Follow him on Twitter @m_delamerced

David Benoit
As the lead writer for the WSJ Deal Journal, Benoit’s name appears on the byline of some of the most widely-read articles in the deal business. He publishes content all day, every day that the markets are open. His work is often skewed toward the public markets, but there’s a lot to be gained by knowing which public companies are active in M&A. If you’re interested in staying up-to-date on public mergers, take-privates, and public company corp. dev., his articles are a must read. You can follow him @DaveCBenoit

Bernard Vaughan
Bernard publishes news constantly for both Buyouts and peHUB. If you want to know what’s going on inside private equity — from funding to exit — follow Bernard. He’ll give you more to read in a day than some other journalists will give you in a week, and unlike some, he doesn’t appear to be worried about how industry players will respond to what he writes. Instead, he just cranks out copy. Follow him on Twitter @BVaughanReuters

Beina Xu
Beina’s work lives behind the Dow Jones paywell, writing for the LBO Wire, Private Equity Analyst, WSJ and Newswires. She even contributes to the Private Equity Beat Blog from time to time, and she’s known to uncover scoops daily. And if that weren’t enough, she also takes photographs for the Beat Blog. Follow her on Twitter @spillthebeins.

Tamika Cody
Tamika is a powerhouse personality who seems to be everywhere in the lower middle market, from ACG Intergrowth to local industry events and chapter meetings across NYC. She covers M&A from every angle, from the hottest tech deals to the biggest legal issues affecting the industry, and she has fun doing it. Follow Tamika on Twitter @TamikaCody

Mary K Flynn
After moving from The Deal to Mergers & Acquisitions, Mary Kathleen Flynn took over as the Editor and Chief. Under her direction, themiddlemarket.com has continued producing a steady stream of great articles and insights into middle market deal making. Follow her Private Equity Perspective articles and videos for her interviews and discussions with deal makers about some of the hot topics in the private markets. Follow her on Twitter @MKFlynn

Katie Roof and Sarah Hashim-Waris
This video power pair produces consistent, interesting interviews for The Deal. Their short videos give a quick burst of information from some of the titans of the industry, shedding light on financial issues ranging from middle market outlooks to exchange consolidations, IPOs and everything in between. Perfect for when you want an idea but don’t want to spend all day trying to find the insights. Follow Katie on Twitter @Katie_Roof and Sarah @whensarsattacks.

David Snow
After originally launching as SnowsNotes, David Snow has turned the video podcast PrivCap into an interviewing powerhouse similar to Charlie Rose for the private markets. With in-depth interviews across venture capital, private equity and cross-border deals, PrivCap is an essential part of the information diet of any serious middle market dealmaker. You can follow him on Twitter @SnowsNotes

Again, we’d love to thank @pe_feeds for all of his help putting together both parts of this list. Congratulations to all of the journalists who made our list.