Note: The following is a guest post by John Slater of FOCUS, a nation-wide investment bank and Axial Member. Slater is a FOCUS Partner and Capital Financing Team Leader.

Business owners time their exits for many reasons: health, retirement planning, availability or lack of family successors, competition, technology change and many more.  Yet overwhelmingly the question we are most often asked as a financial advisor to entrepreneurial companies is “What’s my business worth?”  All things being equal, a rational business owner will presumably choose to sell at a point of optimal value for his or her interest in the firm.  For the reasons outlined below, we believe that the next eighteen months may see the highest pricing for good middle market companies in the thirty years I have been in the M&A advisory business.

Historically the market for mergers and acquisitions is one of the most volatile on the globe.  In our experience the market is very cyclical with three to four years separating peaks and troughs and six or seven years to cover a full cycle.  The last bull cycle for M&A peaked in 2006-2007 and the market trough was witnessed in 2009-2010.  2011 and 2012 witnessed some moderate improvement, with Q4 2012 being particularly strong.  2012 was Focus’s best year since 2007. 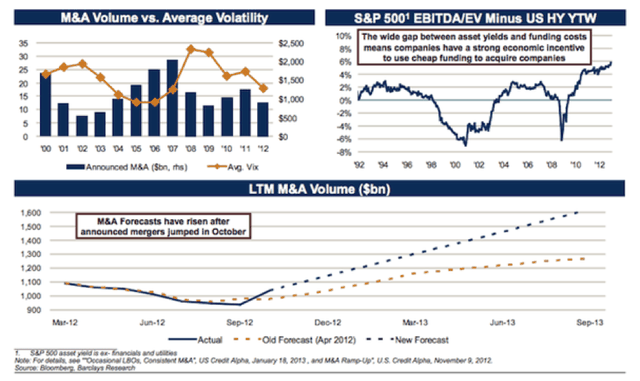 2013 has started with a bang with large announced deals for Dell, Heinz, and Virgin Media just to name a few.  Many observers predict that these are not isolated deals and that 2013 will witness a resurgence in M&A activity.  While the M&A market could be derailed by a major decline in the equity markets or further chaos in Washington, we believe that the odds favor a strong market for sales of middle market companies through sometime in 2014.  By then a correction will be overdue and the likelihood of a cyclical bear market in equities may become increasingly high.  Generally a serious decline in the stock markets leads to a precipitous fall in M&A activity.

The next 12-18 months will almost certainly be a highly favorable period for business exits.  If this proves to be a cyclical market top, the next favorable period for businesses owners wishing to sell may not come around before the 2020s.  In 2020 today’s sixty six year old Baby Boomer will be seventy-three and today’s fifty eight year old will be sixty five and studying Medicare options.

In 2012 Focus witnessed a strong recovery in sell side M&A values, with seven closed sales and average pricing above seven times EBITDA.  Several recently issued reports indicate that our experience was consistent with the overall market.  For example, GF Data Resources, which tracks middle market M&A values based on data provided by more than two hundred private equity firms,recently reported that for deals in the $10-250 million range:

We are again seeing heated bidding wars and multiples exceeding 10x for great companies in hot industries.  One important driver for the valuation jump in the middle market is an increase in total leverage available from a range of 2.5 – 3.25 times cash flow immediately following the 2007/08 recession to a 2012 range of 4-4.75 times.  Companies with steady, highly predictable cash flow are seeing leverage multiples of up to 5 times cash flow and even more for companies with EBITDA over $20 million.  As a result sponsors were able to reduce their equity commitments from the fifty percent range typical in 2010-2011 to a range of 35-40% of total capital in 2102.

With their various QE programs, the world’s central bankers have created a tremendous overhang in global financial markets.  Individual investors have begun to grab for yield, pushing “junk” bond yields to levels formerly reserved for A rated credits.  Thomson Reuters LPC reports that leveraged lending for private equity backed deals reached $70 billion in 2012, a hair’s breadth shy of the 2007 record of $71 billion.  Private equity funds are aggressively pushing to fund finance companies and other direct lenders that were previously off limits to all but a few specialists.  PE firms’ limited partners are even creating their own direct lending teams to enhance their yields.  There should be a great deal of leverage available to support PE M&A deals in 2013.

Bain and Company has recently predicted that global capital assets will grow to $900 Trillion or approximately ten times predicted global GDP for 2020 of $90 Trillion.  The chart below predicts a financial market pyramid that most readers will find quite frightening. 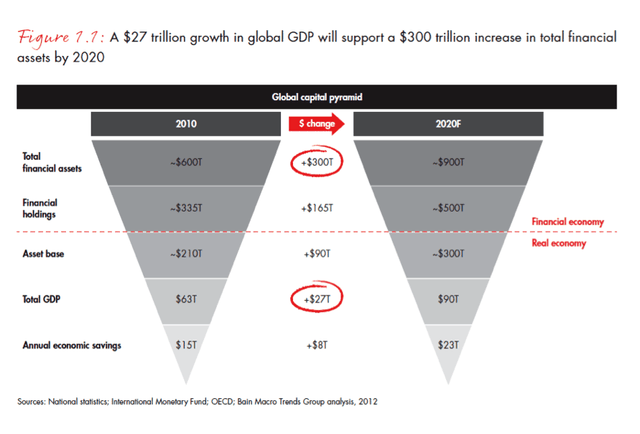 Bain suggests that this capital overhang will result in more frequent bubbles forming in particular asset classes as wealth managers race toward particular sectors which they believe promise stronger than average yields.  We expect that middle market M&A is a likely sector to experience a rapid increase in asset allocation this year and that this should be reflected in a move to record sales multiples for the many companies over the next eighteen months.

In discussions with a number of wealth managers, we have heard a consistent refrain.  “Over the past decade the endowment funds that ventured early into alternative assets have achieved superior returns.  We are recommending that our clients increase their allocations to alternative assets and particularly to private equity where the endowments have witnessed their best performance.”  This was recently confirmed in a study commissioned by Mergermarket, which recently published a report entitled Alternative Investments Outlook 2013:  Limited Partner Survey.  Based on interview with 100 active private equity limited partner investors, they reported:

“According to the LPs interviewed, private equity has successfully rebounded from the crisis, and is positioned for a strong 2013.  Nearly half of respondents say that their PE investments have surpassed their expectations and, of those who plan to adjust their allocation to private equity within the next year, the overwhelming majority (95%) expect to increase the amount apportioned to the (private equity) asset class.”

Private equity funds have an overhang of $100 Billion of commitments that must be invested in 2013 or lost.  Since fund management fee income is directly proportional to committed funds plus investments, failure to use this money would have very negative consequences for many PE groups.  Thus many of these funds will find themselves under tremendous pressure to do deals, even if they find that doing so requires an increase in their valuation expectations.

The biggest wild card remains the banks, which have become more aggressive in their pricing but have not yet returned to the wild days of the mid 2000s in terms of leverage and coverage ratios.  Should they do so “Katy bar the door” we may be in for a wild ride indeed.  Even without the banks, the major commitments being made to business development companies and PE firms to fund cash flow based loan facilities and other growth capital funding may be sufficient to drive leverage multiples higher.  Should the PE firms react to the new influx of LP investments with an increase in equity allocations to their deal funding, the stage could be set for a lively auction market that pushes middle market purchase multiples to levels never before seen.

How Should Business Owners React?

Many middle market businesses that were hurt by the crash and 2007/08 recession now have three years of solid performance and growth under their belt.  These are the types of results that private equity firms crave.  The owner of such a firm who is ready to sell based on non-market factors, should take action yesterday to get into the market.  There is room in the pipeline for now, but by mid-year we expect most of the players in the M&A market, from the investment bankers, the PE firms and their lenders to the lawyers and accountants who drive much of the timing should be getting very busy.  On the backside, the one thing we know about M&A cycles is that, no matter how strong the market, once the tide recedes, it is often years until it rises again.  Miss this window and you may have a very long wait for the next one.

Those owners whose ideal time frames are a bit longer, say three or four years out, should give serious consideration to sale today.  If the current cycle resembles the past, the middle market M&A boom predicted here may likely peak between late 2013 and midyear 2014.  By then the Fed will likely have begun to tighten credit, resulting in a rise in interest rates, which normally makes leveraged deals far less attractive.

Another presidential election will be looming and the next change of power in America carries a great deal of risk for the capital markets.  The equity collapse around the 2008 election had the effect of depressing the M&A market for an extended period.  There is a real risk that there may be no three to four year window for business owners wishing to sell.  If history repeats, the current favorable window could shut within one to two years at the outside and most likely not reopen until the 2020s.

Finally for the business owner with a longer horizon, this market may present a unique opportunity for growth through judicious acquisitions.  The 2020s promise to be an era when many of the technologies now taking root, including personal robotics, bio-engineering, nano-technologies and artificial intelligence coalesce into a period of global prosperity unimaginable to most observers beaten down by the steady drumbeat of depressing news.

For those business owners that share that optimism, the current market presents an interesting dichotomy; while middle market companies with steady and increasing EBITDA in excess of $5 million are enjoying record valuations, many smaller firms still sell for much lower multiples.  Many companies have found their capital bases depleted after several years of struggle and are handcuffed when it comes time to resume their growth.   Many of these firms will find it necessary to team with a larger, better-capitalized acquirer to reach their full potential.  Thus we are seeing a number of companies that have been on the sidelines for several years begin to open their purses to acquire smaller firms that fill in gaps in terms of product line, technology, personnel or distribution chains.

The next 24 months should be interesting indeed.  Whether they ultimately choose to sell or grow, business owners who ignore the current trends in the M&A market are running a significant risk of missing opportunities that they may not see again for many years.