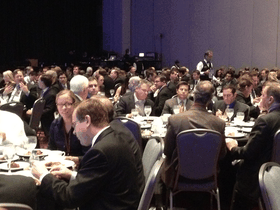 M&A East concluded yesterday and it was a great event (kudos to ACG Philly!). Stationed at Booth 202, the Axial team was able to meet with dozens of our Members, learn opinions about the current M&A environment, and hear some truly incredible keynote speakers. Remarkably, there was over $100 billion in available capital in the venue. Certainly a good place to make some connections.

For those of you who were unable to attend the conference, we wanted to take this chance to give you a quick recap of some of the major takeaways from the event:

DealSource and Capital Connection are as exciting as ever: Axial was fortunate enough to have its own table at DealSource and was reminded of why these two events are the primary attractions for the conference. As one of our Members told us, “Any day that I have 10 meetings with 10 banks is a good day.” These rapid-fire meetings can be extremely valuable and most of the time they create connections that pay off shortly after the event. The risk, as always, is that the relationships often end up being short-lived. To ensure long-term connections and a high return on your invested time, it is important to leverage these relationships the other 364 days of the year. After a good conversation, be sure to to connect with your new contacts on Axial. Don’t rely on having people remember your deal or investment criteria a few months later – especially if you met over cocktails. Here’s a great picture of DealSource from @ACGPhilly: pic.twitter.com/1smDVXt3

Bob Woodruff is a veritable superman: Woodruff – who was injured by an IED while reporting in Iraq in 2006 – told his story as the first keynote speaker at ACG Philly. Anne Buchanan described it best when she tweeted “Cannot describe the chill that has fallen over this room as @BobWoodruff describes his IED injury.” His recovery story — which includes 36 days in a medically-induced coma — is truly an inspiration.

Mark Zandi is optimistic about our economic future: Mark Zandi – Moody’s Chief Economist and the second keynote speaker – told M&A East that he optimistic about the future, believing that we have “righted a lot of the wrongs that have gotten us into this mess.” One of the key takeaways from Zandi’s speech is the importance of education – Zandi anticipates that there will be labor shortage in the near future, and that investing in education can help mitigate the severity of the problem. He also commended the private sector for having a good balance sheet. Watch this conversation between Zandi and Mary K. Flynn to learn more about his thoughts.

David Gergen is optimistic too: The third and final keynote speech belonged to David Gergen, the current Editor-at-large for U.S. News and World Report and a former presidential advisor in the Nixon, Ford, Reagan, and Clinton administration. Echoing the same optimism at Zandi, Gergen encouraged investors to hold on. “Don’t bet against America. We are very resilient.” He later explained that Americans are inherently creative and innovative (and China is simply imitative). The debate from the previous night added some fodder for interesting political commentary.

Strategics are active: With experts from Ametek, SAP, Gichner Systems, and HIG, the panel made it clear that strategics have had a strong market presence over the past year. For example, strategics purchased over 3,100 companies, where PE purchased only 1,100 companies this past year. Bill Nolan, of HIG, added to the sentiment by explaining that he cannot compete with a strategic that is anxious and set on a specific business. With better partnerships, networks, and cash, strategics are often better suitors. However, PE shops are better at handling those “11th hour hiccups” that occur in due diligence.

Cocktails at the Palm: Thanks to the over 75 Axial Members that attended our Members Only cocktails on Tuesday evening. It was great to see the online network so seamlessly translate into an offline environment. After interacting over the phone and the internet, it is rewarding to finally tie a face to a name. RSVP for our future Axial events!