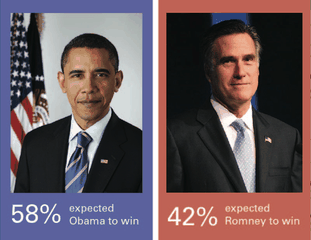 President Obama will keep his office for another four years.

However, according to the results of our Corporate Development Survey, this news should not be a surprise to many of you. In the survey, both strategic and financial buyers agreed that Obama would be the likely victor. We must have some pretty astute readers…

Despite the predicted results, many firms used the uncertainty of the election to hold off on major strategic planning. The combination of a weak economy, a presidential election, and an anemic Europe undercut confidence in the ability to accurately predict the coming years.

With the election now behind us, the uncertainty should be dissipating. Why does it feel like hesitancy lingers in the air? Many of the issues that sparked the initial pre-election uncertainty remain unresolved — issues of economic recovery, taxation, and a president’s strategy. Deal shops are unsure what changes lay ahead. We explore the five biggest uncertainties below:

The ‘Fiscal Cliff’: One uncertainty that has investors particularly concerned for the future is the impending ‘fiscal cliff.’ The ‘cliff,’ which is meant to begin on January 1, 2013, refers to a combination of taxation and debt reduction measures designed to reorient the economic recovery in the United States. Many fear that if the ‘cliff’ is implemented as is, it could derail the current recovery and push us into austerity measures nearly as rigid as those in Greece. Others, however, are more hopeful about the new policies, believing that they could provide enough of a shock to notch the economy back to a stable foundation. Until more is released from the second Obama administration, it remains unclear how these economic policies will finalize and how they will impact businesses, large and small.

Corporate Taxation May Rise: Impending changes to corporate taxes could be particularly problematic for strategic buyers. While on the campaign trail, Obama claimed that he was going to cut corporate income taxes from 35% to 28% in an effort to facilitate economic activity and job growth. In exchange for the cut, Obama would eliminate the numerous loopholes and deductions that have traditionally benefited corporations. With these loopholes, most corporations have an effective tax rate of ~24%. If the loopholes are removed, the 28% tax will actually be a higher rate for many businesses. However, it remains unclear if and when such cuts would occur. With higher taxes rates, new added taxes, and PE competitors eager to burn through their dry powder by the end of 2013, strategics could find next year to be a sluggish year for M&A.

Capital Gains Taxes: Strategic buyers will not be the only ones potentially impacted by new tax policies under the second Obama administration. As we learned on Tuesday, the Bush-era tax cuts on capital gains are set to expire on January 1, 2013. The expiration of the cuts will raise the long-term cap gains rate from 15% to 20%. However, a great deal of uncertainty remains as to whether or not the taxes will fully expire. Until the Obama administration explicitly spells out its new taxation policy, financial buyers are in limbo. Still, the prospect of an extra tax — let alone a full 5% — has caused a surge in end-of-year deal flow as many businesses and PE shops look to close before December 31. If these deals flood the market before December 31, the first few months of 2013 could be particularly slow.

Carried Interest: GPs may be looking at new taxes in 2013 as well. An overhaul on carried interest taxation was part of both the Obama 2008 and 2012 campaigns. Having not accomplished any restructuring in his first term, it is likely he will persist with the issue in his second term. To add fuel to the carried interest fire, the recent scandal involving Attorney General Schneiderman’s investigation into the management fee waiver programs has made carried interest more of a hot-button issue than ever before. However, the importance of carried interest in the next few months will be related to how long PE firms remain in the spotlight. Most of the recent press has been an immediate consequence of Romney’s campaign for president and the conclusion of the election might also signal the abatement of people’s concern for detailed PE workings. Then again it may have just been the press the President needs to get carried interest legislation changed.

A Second Term President: The fifth, and arguably most important, unknown for many businesses is Obama’s status as a second term president. History has shown that presidents tend to act differently in their second term. There has been speculation that Obama will fit this bill, more aggressively pursuing the unfulfilled promises from his first term — like many of the issues above. However, one of the major variables in his agenda is international developments. Will an Iranian crisis pull Obama’s attention back to the Middle East? Will a continued unraveling of the European economy force his focus towards currency issues and away from taxes? Will maneuvers around natural resources and China interrupt his domestic focus? Despite the same President, the same Democratic Senate, and the same Republican House, it is increasingly difficult to confidently predict Obama’s actions. As the President warms into his second term, his position on many of his promises could shift, for better or for worse. Ultimately, only time will tell.

Thanks to Gage Skidmore for the Romney photo and Pete Souza for the Obama photo.