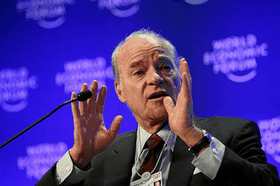 Private equity bosses made some headlines last week. At DealBook’s Post-Election Conference, industry leaders — including Kravis, Schwarzman, Rubenstein, and others — gathered to discuss the current state of the economy. They had some interesting takeaways.

Rubenstein explained that Carlyle was avoiding Russia and Mexico for foreign investments. He (and Schwarzman) encouraged struggling investors to consider private equity as a way to boost their portfolios. However, investing in private equity is not quite what it used to be, as some of the largest firms have diversified away from their “swashbuckling” ways. On a different note, Faisal Hoque encourages VC and PE firms to focus on better execution during an investment, not simply capital.

Where We’re Not Investing: If you are looking to invest internationally, it might be wise to avoid Russia and Mexico. According to Rubenstein, “Russia may be attractive to visit as a tourist, but it’s very difficult to make a lot of money there.” Apparently babushkas do not offer high IRR. On the other hand, Mexico just has very few opportunities for investment — an interesting counterpoint to what our own Eric Rundall from Dura Auto said.  Instead, you might want to look to Indonesia, Peru, Colombia, or Turkey. Rubenstein, however, would encourage you to stay domestic.

Swashbucklers Transformed, and Now Much Tamer: Over the last five years, private equity firms have evolved. Most notably, the private equity powerhouses have begun to move away from, well… private equity. For example, Blackstone’s private equity arm only comprises 25% of total AUM. The diversification is both a proactive attempt to inflate share prices and a reactive attempt to mitigate the fundraising challenges/negative stigma of late. With less emphasis solely on PE, some LPs are beginning to push for lower management fees. Could 80-20 become 90-10? Combine that with the pending carried interest changes and GPs could be seeing much smaller paychecks.

PE is Last, Best Hope for Institutional and Individual Investors: Although private equity may be in an unfavorable light right now, it doesn’t change the numbers: over a ten-year period, a $1 investment by a pension fund in private equity resulted in a return of $2.3. This type of return is why Schwarzman and Rubenstein encouraged both institutional and individual investors to consider private equity if they are under their targets. If enough investors are eager to catch up, fundraising might become slightly easier in the next few years. But will the negative stigma still discourage future investors?

Why Most Venture-Backed Companies Fail: Supposedly 3 out of 4 startups fail. That’s even worse than previously thought. Faisal Hoque believes the number is particularly high because investors often falsely assume money ensures success. Instead, they — both VC and PE — should focus on better execution rather than capital infusion. By shifting the due diligence focus away from simply financial metrics to also include operational capabilities is a good starting point. These varied metrics will help better capture true growth potential. Hoque has a few other recommendations that are worth a read.

Interested in Fundless Sponsors? Check out our Webinar on Tuesday with Merit Capital Partners and Fulton Capital.

Thanks to World Economic Forum for the photo.