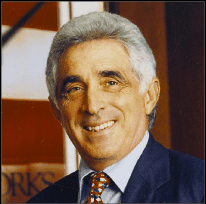 “Colorful” is one of the words most used in describing Teddy Forstmann, a pioneer of the LBO industry, philanthropist in the Giving Pledge, lifelong bachelor, jet-setter, athlete, and father of two adopted boys. Forstmann succumbed to brain cancer Sunday at the age of 71, almost a year since he was diagnosed with a malignant glioma.

A graduate of Yale undergraduate and Columbia Law School, Forstmann read a biography of Howard Hughes when he was young that no doubt influenced the lifestyle of deal-making and world-travelling that he would come to lead. “This guy loved doing deals,” Forstmann said of Hughes in a 1996 AP interview.

Forstmann was unique not only in the lifestyle he led – he was never married, was always linked to different beautiful and high-profile women (Princess Diana included), gave hundreds of millions to charity, bought, ran, and sold companies like Gulfstream, Dr. Pepper, and IMG – but also in the insidious view he came to have of an industry he helped build. He felt that debt levels were getting out of control in the late 1980’s, and his walking away from the RJR Nabisco bidding was emblematic of his conservative risk profile. He placed a premium on operating businesses and often took the responsibility of the CEO role, and depended on this strategy over using extreme leverage, to yield upwards of 50 percent yearly returns to his fund through 2001.

He loathed Michael Milken’s firm, the famed, notorious, and bankrupt Drexel Burnham Lambert that pioneered the junk bonds that fueled buyouts at ever-higher and dangerous leverage multiples. Forstmann referred to such junk paper as “funny money” and “wampum,” and refused to use it to finance deals. As he put it in a 1988 Wall Street Journal Op-ed, “Watching these deals get done is like watching a herd of drunk drivers take to the highway on New Year’s Eve.” In an AP interview that same year he continued in the same vein, “Today’s financial age has become a period of unbridled excess with accepted risk soaring out of proportion to possible reward. Every week, with ever-increasing levels of irresponsibility, many billions of dollars in American assets are being saddled with debt that has virtually no chance of being repaid”

In retrospect, in the wake of 2007 – 2008, he was prescient beyond the Drexel Burhnham bankruptcy. His style of conservative financing and operational expertise in the buyout industry, and its enduring viability, was summed up by the title of the Yale School of Management Private Equity 2011 conference in Stamford two weeks ago: “The Journey from Financial Engineering to Value Creation.”

He was outspoken and ardent. Fellow private equity immortal Henry Kravis said of him to the New York Times, “No matter what he undertook, whether it be private equity or philanthropy or sports, it didn’t matter. He was passionate about it. He was extremely competitive. He did everything extremely well. He was a man who had a lot to be proud of.”

Likewise, Meredith Whitney gave a similar narrative to DealBook: “He was incomparably generous and loyal to his friends. His annual Aspen conference was considered the most thought-leading, exclusive conference of its kind. He was forever on a quest for learning. Women loved him, men wanted to be like him. We will all miss him.”