Tensions are running high as 2013 approaches. Unable to predict which way the fiscal cliff will be resolved, which way the market will trend, or even which industries will be most active, investors have come to a standstill. Some, including Henry Kravis, have even encouraged investors to close deals before December 31 for fear of the new environment that may lie ahead.

But is that really the right way to forecast the next year? Despite the grim consensus, there are reasons to believe that 2013 will be stronger than anticipated. The current bearishness is a consequence of the uncertainty of numerous political and economic decisions. However, once these uncertainties are resolved — or embraced — it is likely that investors will become unstuck and begin to re-engage in the market.

Deals are Waiting, not Gone:

Whichever way you cut it, deal activity is down. From October to December of this year, the number of deals brought to market dropped by nearly 70%. However, just because a deal hasn’t come to market yet doesn’t mean it is nonexistent. Many sellers have decided to sit on their deals, waiting for the uncertainty to settle rather than immediately bring them to market. This watching and waiting has caused conditions to seem more barren than they really are. 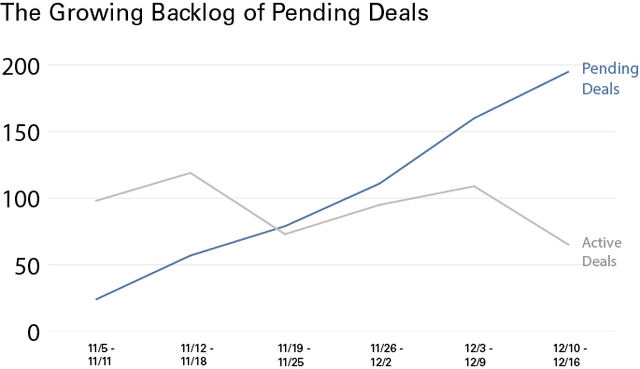 With a greater percentage of deals in the queue waiting for end-of-the-year government decisions, activity on the market could return essentially overnight. Although such a rapid uptick might seem unlikely at first , a very similar trend occurred at the end of 2011.

Last year — like this year — was clouded by end-of-the-year government deliberations. The choice concerns then were capital gains taxes and the unstable European economy. In response to that uncertainty, deal flow decreased by nearly 47% from October to December. 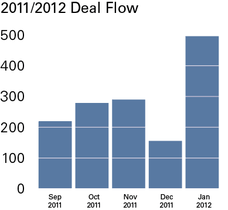 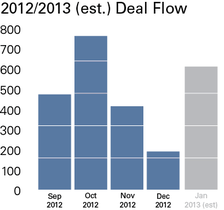 Once the new year began, the uncertainty was alleviated when capital gains rates were extended and the European crisis seemed to stabilize. Although neither issue had truly been resolved, there was greater visibility into the market. By the end of January 2012, the number of deals brought to market was 221% higher than that of December.

Although the slowdown this year is more pronounced — especially given the fiscal cliff — the inactivity follows a similar trend. If the pattern holds true, early 2013 could see a rapid increase in deal flow and activity.