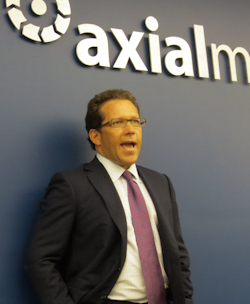 If you were challenged to hold just over 1,000 in-person out of office business meetings in 12 months, could you do it? That’s 83 meetings per month, 19 per week, 4 meetings every business day.

As it turns out, Pelham Street Capital’s founder Brian Meyer has been doing this for about a decade.

Meyer, for those of you who have not met him, is one of the most active and connected deal professionals in the country. With over 14,000 contacts in his personal database, he is a “super-Connector” in the deal community. Last Wednesday, we invited Meyer in to Axial HQ for a talk and an informal clinic on relationship management. He spent an hour with us sharing his story and explaining his approach to building and managing a personal network larger than most small cities.

Meyer’s abridged story begins in 1989 when he joined Lehman Brothers. Over the next thirteen years, he would go on to work on M&A deals at several leading investment banks including Lazard Frères, Goldman Sachs, Bear Stearns and Thomas Weisel Partners.

After leaving investment banking in 2004, Meyer set out to buy a small business and asked himself, “how do you close a deal?” When you break it down, it takes two main components: 1) a deal to look at and 2) money. Meyer decided to set about scheduling as many meetings as he could fit into a day. He sought out respected contacts and people who likely had access to either deals or capital. He believed that if he continued to meet with great people every day, something great would come of it. After every meeting, Meyer took detailed notes and added them to his business journal.

Over a nine-month period, Meyer had 735 meetings with senior deal professionals across industries, geographies, transactions sizes, and other criteria. It was during this chapter that Meyer learned that he loved being a “Connector” of people and deals. After nearly fifteen years of working for some of the most elite investment banks in the country, Meyer began an entrepreneurial career doing what he loved: “connecting people and deals”.

He was so effective that he caught the attention of the founder of Sun Capital Partners (who turned out to be his 713th meeting of 2004). The founder of Sun Capital recognized Meyer’s talent and began actively recruiting him. Meyer spent the next four years leading Sun Capital’s deal origination efforts, both in the U.S. and in Europe, creating thousands of relationships and building one of the most robust deal sourcing pipelines in the private equity business.

When Meyer departed from Sun Capital in 2009, he returned to his work as an entrepreneur and formed Pelham Street Capital; he hasn’t stopped having meetings since. Pelham Street simply connects “deals and money” by introducing 1) deals to people with money and 2) money to people with deals. That is all. Meyer’s “secret sauce” is that, after two decades of doing deals and developing deep relationships with his contacts, he is able to figure out which deals, based on their individual deal dynamics, would fit best with which of his clients, making the process more efficient for everyone involved.

On Wednesday, when Meyer visited with the Axial team, he explained a few of the things he’s learned over the years. For him, it all starts with personalized correspondence with the people he’s met. Meyer’s approach is simple but requires tremendous daily discipline: there is no point in having meetings if you don’t take notes; there is no point in taking notes if you just have a stack of notebooks and a database; and there’s no point in having a database if you don’t use it systematically. Meyer knows that his database isn’t the end, but rather one of the key means to having effective business relationships. He remarked at how he often talks with people who claim to have certain relationships, but when asked who they know at the stated firm, it’s obvious that their connections are weak and cursory. The trick, Meyer told us, is to have frequent communication with the right people and to keep your relationships conflict-free, transparent and informed. “Trust, discretion and confidentiality are critical to having strong relationships within the deal world.”

Meyer was quick to point out that what he does isn’t complicated – it just takes a lot of hard, consistent work. “Anyone could do what I do,” said Meyer, “it just takes three things: 1) Hustle, 2) Trusted Relationships, and 3) Organization.”