In reviewing the Axial Network activity for October, we learned that October was a busy month. A very busy month. Despite its stormy end, we saw more deals come to the Network than ever before. As the graph demonstrates, October saw 786 new deals — 60% more than September and 42% higher than the previous high in June. 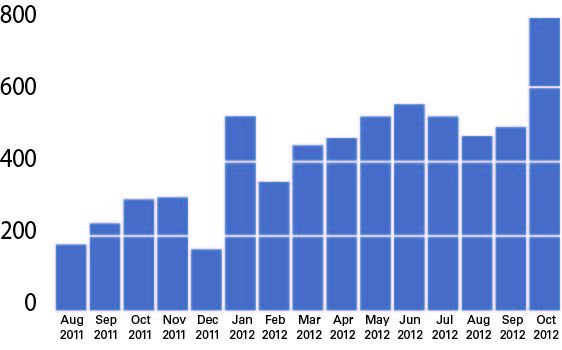 Naturally, we were intrigued by the spike. While we anticipated a slight rise in deals — given the 28% increase between September and October 2011 — the 60% growth between September and October 2012 was dramatically larger. Seeking an explanation for the increase, we sought out some experts to determine if the activity could be related to the impending tax changes in 2013.

Member Darren De Vries of Fleetridge Pacific, agreed that the tax policies could be a contributing factor for the increased deal flow. “The spike [in deal flow] is already happening and it is a factor for businesses that are on the market right now. Clients that we are working with today are seeking a close date no later than December 31.”

Michael Goodman of Wealthstream Advisors broke down the new taxes. “At the end of 2012, there are four major tax changes that are expected to happen: an increase in the income taxes; an increase in the cap gains rates (including dividend taxes); an increase in estate taxes; and a series of new taxes, including the 3.8% Medicare tax and an additional FICA withholding of 0.9% for people with an income over $250,000.”

For deal professionals, the capital gains increase is the most impactful. The current legislation designates that the Bush-era tax cuts — which dropped the cap gains rate from 20% to 15% — are set to expire on December 31. For SMBOs looking to sell and PE shops looking to exit, the extra 5% could be accelerating many of their deals to close before the end of the year.

De Vries added that while the window to sell before December 31 is still open, you should have begun the process yesterday. “I think you can close in 60 days if you have financial and compliance records in order. If you can produce true accrual financial statements with adequate supporting documentation, you will be able to expedite the due diligence process. Although a challenge, it is possible.”

Some businesses are holding out that the cap gains tax cuts will be extended — as they were in 2010 — but there has been no indication that the cuts will be extended again. However, Goodman believes the cuts may not simply expire. He explained, “Rather than returning to their previous highs, I expect that there will be some sort of compromise after the election regarding the appropriate tax rate.” He added, “For example, rather than capital gains tax returning to its full 20%, it may only rise to 18%. Or, the Bush tax cuts may only expire for people above a certain income.”

De Vries agreed with Goodman’s assessment. He explained, “A compromise is a probable scenario. There is a good chance that the Bush tax cuts benefiting higher income individuals will not be extended. Any compromise will likely take the form of extending the tax cuts for all but high income individuals.”

Although it is uncertain how the taxes will actually develop — especially pending tonight’s election — we certainly hope that Goodman and De Vries are right about a compromise. If the ‘fiscal cliff’ is implemented as is, austerity measures could reach 5.1% of GDP, pushing the US dangerously close to derailing the from its current recovery path.