This is the second in a three-part series providing insight into patent valuation. Part 1 provides a primer on how patents impact business valuation. Here we’ll cover 10 specific factors that impact a patent’s value.

There is tremendous uncertainty associated with assessing the value of patents. However, it is this uncertainty that can be used to make an argument about the value of a patent. The valuation analyst could review certain characteristics pertaining to a patent and argue that such set of factors is a positive or a negative factor in the patent’s expected value.

What makes a patent valuable?

While the complexity of–and uncertainty surrounding–patents makes it impossible to derive definitive valuations, there are a host of factors that are determinative of patent value. While a few of these factors are provided below, it is critically important to realize that businesses that attempt to commercialize their patents, don’t receive the value (deal) that their technology (patent) deserves, they receive the value (deal) that they negotiate.

Years of patent life remaining. Most investors would not want a patent that has limited years of patent protection (e.g. one that is more than 16 years old). However, a patent that was too recently issued (e.g. within the past three years) is unlikely to have been litigated. The average age of patents when they are litigated is three years old. It is better to acquire a patent after it has been proven valid during litigation or has passed through the period when challenge to its validity is most likely. As a sweeping generality, those patents that are most valuable are between 10 and 13 years old.

Anticipated licensing revenue. A standard procedure in patent valuation is determining the net present value of royalties that will be received as a result of licensing the patent. One benefit of developing a highly delineated model of projected royalties is that very specific factors can be taken into account.

Ability to trigger sales of end products. Patents are most valuable when they cause consumers to buy more of the product or newer versions of the product. For instance, some ten years ago Intel and Microsoft were able to spark sales of personal computers when they introduced new semiconductors and software. Consumers willingly retired perfectly good PCs as they raced to embrace PCs with the greatest processing power and snazziest software. Similarly, patents that increase the utility for existing or new users are generally very valuable. Examples of this can be found in the patents behind the features on cell phones. Finally, patents are valued dearly when the patented feature is a primary factor in the demand for the product. This is to say that the patent is the product. Examples of this contention include the primary patents underpinning many pharmaceuticals, Velcro and Post-It notes.

Ability to generate add-on sales. A licensee may derive important ancillary benefits associated with selling products with embedded cutting-edge technologies. The benefits may be in the form of greater traffic generation to its web-site, catalogs, or stores. A more direct example of generating add-on sales would be a patent that improves on the functionality of ice skates could also contribute to higher sales of protective gear. In such instances, the licensor should seek higher licensing fees from the licensee since the licensee will enjoy spill-over benefits associated with selling the cutting-edge technologies.

Ability to generate sales in new markets. Licensors typically seek lower royalty rates from licensees who will sell the related products in a new market compared to the royalty rates they seek from competitors who will challenge the licensors in their existing markets. While the royalties per unit from the former licensee will be lower, there are two factors that are accretive to patent value in this scenario. First, the total royalties generated by a licensee pioneering a new market are likely to be substantial. Secondly, licensees penetrating new markets do not pose the profit denigration issues for licensors that competing licensees represent.

Stage of development. Typically, the earlier in the commercialization stage a technology is, the lower the licensing value. This is because there are significant risks in the technology never being brought to the market–and if the technology eventually becomes market-ready, this will only be achieved at great expense. In the scenarios in which the licensee would have to make much of this investment, the licensing fees would be less lucrative for the patentee.

Quality of law firm. Services such a PatentCafe rate and rank law firms on their history of writing patents that successfully sustain invalidity challenge. Patents drafted by law firms that score highly on such rosters are generally of higher quality than patents that score poorly on such surveys.

Quality of patent examiner. Patents that are granted by patent examiners with longer tenures and more impressive records of granting patents that successfully sustain invalidity challenge are statistically more valuable than patents without such lineage.

Size of portfolio being sold. Our research indicates that each patent family will receive the highest price when between 25 and 76 patent families are included in a patent portfolio. Portfolios with more than 76 patent families are discounted because the buyers believe that the sellers are purging a lot of their mediocre patents in the portfolio sale. On the other side of the spectrum, selling too few patents yields a discounted value per patent because of the natural aversion that patent managers have to seek significant funds (e.g. $3 million) from their Boards of Directors in order to buy a small number of patents (e.g. two). 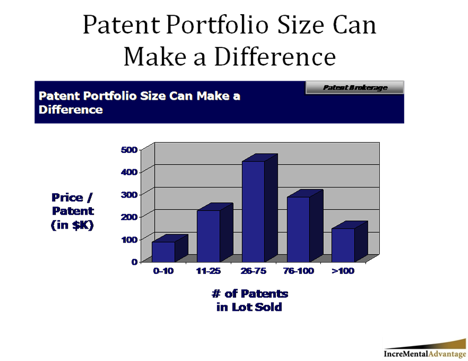 This featured guest post is written by David Wanetick, Managing Director at IncreMental Advantage, a strategic advisory firm. He leads all of the firm’s Devil’s Advocacy Audits. He teaches courses on Negotiations, Behavioral Economics and Decision Making at The Business Development Academy. David can be reached at dwanetick@incrementaladvantage.com.

This article is provided by Axial Inc. and its affiliates for educational and informational purposes only and is not intended to constitute, and should not be construed as, legal or business advice. This article is a summary that we believe may be of interest to you for general information. It is not a full analysis of the matters presented and should not be relied upon. Prior to acting upon any information set forth in this article or related to this article, you should consult independent legal counsel.