After graduating from college, Zalben moved to New York City, earning his master’s and landing a job in publishing. It wasn’t long, however, before he realized that what he was doing wasn’t the right career path for him.

While walking past an abandoned storefront in Greenwich Village one day, Zalben thought he might have found the perfect place for the peanut butter shop he had in mind. Zalben says of that moment: “From the moment I stepped in, I could see it. This is where the counter will be, this is where the tables and chairs will be. The next day I quit my job.”

Zalben took on some freelance work while he wrote a business plan and researched everything he could about peanut butter and running a restaurant. Peanut Butter & Co. launched six months later, and within weeks of opening, the store had lines out the door and around the corner. 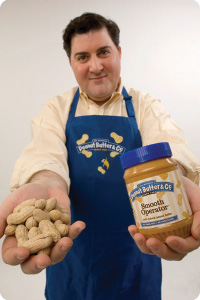 In a recent interview, Zalben shares more of his story and some of his rules for building a successful business:

After launching in 1998, Peanut Butter & Co. today boasts $10 million dollars in revenue, a staff of 25 employees, and 10 varieties of all-natural peanut butter. Zalben’s products are sold in over 10,000 retailers nationwide, as well as in Canada, the U.K., Japan, and Hong Kong.