Would you invest in a company that only closed 1 out of 80 leads? Or a company that typically took one year and 3 professionals just to close a single client? 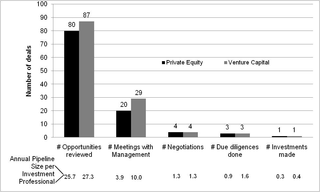 By the standards of most traditional sales processes, private equity origination is an extremely low-yielding and labor-intensive process…despite the fact that an effective deal origination process is fundamental to successful investing. We’re particularly surprised by this, because private equity funds who employ a proactive origination strategy have consistently higher returns, driven by both greater quantity and higher relevance of incoming investment opportunities.

Out of 5,923 investment professionals in our dataset, 916 (15.5%) were focused primarily on origination and marketing. This is a significant increase over the percentage a decade ago. According to a recent Parthenon Group study, 55% of surveyed private equity funds plan to change their origination processes over the next 3 years — a higher percentage than fundraising, portfolio management, or any other fund process. One of the implications of this: more and more funds are hiring dedicated origination professionals.

Castle Harlan, a $3.2b PE fund, completed an internal study in 2009 of the sources and returns of all their completed transactions (68 deals, 38 exited). The relevant deal team rated the importance of seven proprietary strategies to winning each deal, on a scale of 0-10 (10=maximum). For example, “finder” and “industry expertise” were two of the strategies. (“Finder” was typically scored as a binary, with either a 0 for no finder involved or a 10 for a finder playing a key role in sourcing the transaction.)

Many of these sellers probably ran a limited auction, and by definition Castle Harlan won the auction. In any such situation, an investor doesn’t know if it is the smartest person in the room who is justified in paying a higher price…or if it suffered the ‘winner’s curse’ of paying above the real value. By having a proprietary angle, Castle Harlan increased the odds of being the smartest person in the room, not just the highest bidder.

By contrast, deals characterized as being sourced through external finders of any kind were associated with lower entry multiples, but also relatively less attractive realized outcomes. (Only 9 investments had a “Finder” score of 5 or more, out of the maximum possible of 10.) Deals sourced through affiliated investors; through relationships with current management; and/or through relationships with non-incumbent management were associated with slightly higher entry multiples, but also better outcomes.

We have identified five recommendations to improve the volume and relevance of dealflow.

More data from this research project is posted at https://www.dealorigination.com.

David Teten is CEO of Navon Partners, a startup building a proprietary technology platform to analyze private companies and source transactions for private equity funds. He is Chairman of Harvard Business School Angels of New York, and has started 3 companies and sold 2. He is a former Bear Stearns investment banker and Harvard MBA, based in New York, NY.

Chris Farmer is a Venture Partner with General Catalyst Partners, a leading venture capital fund based in Cambridge, MA. He is also Founder & Chairman of Ignition Search Partners, a leading boutique executive search and talent advisory firm based in San Francisco, CA. We thank Yujin Chung (Andreessen Horowitz) and Neha Kumar (Anklesaria Group) for their invaluable help in supporting our analytics; David Teten’s former colleagues at Evalueserve for their initial help in creating our database; and our interns Dan Clark, Nitin Gupta, and Nikhil Iyer.