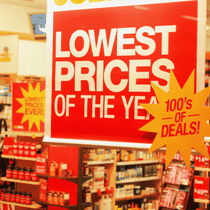 As many Americans were recovering from the inevitable post-Thanksgiving food coma, some ardent shoppers prepared for their favorite holiday: Black Friday. For these shoppers, the holiday offers incredible sales, long lines, and spontaneous campsites outside the local department stores. For everyone else, it offers headaches, traffic jams, and the occasional economic insight.

However, in recent years, Black Friday has begun to evolve. With the advent of Small Business Saturday, Cyber Monday, and Mobile Tuesday, the one-day spree has turned into a multi-day bonanza. Even more so, the holiday has continued to witness a rise in online retail, enabling even the most crowd-averse shopper to participate in the holiday.

Just take a look at the numbers: An estimated total of $12 billion in sales with over $1 billion made via the internet. That’s the highest online total date — and an increase of 20.7% on Black Friday.

If Black Friday is a proxy for general consumer confidence and economic activity, these numbers suggest that there will be continued economic recovery in the immediate future and a greater emphasis on online retail in the long-term. With timely positioning, these changes could benefit both current and future investments.

The trending numbers on Black Friday indicate that consumers are generally optimistic for the coming months. Despite the looming fiscal cliff and uncertainty surrounding Europe’s economic stability, consumers still flocked to brick-and-mortar and online stores.

The activity and optimism is a promising sign. As G. Scott Clemons, of Brown Brothers Harriman, explained in a recent New York Times article, “The real engine of economic activity is still personal consumption.” He added, “The housing and labor markets are the canaries in the coal mine for the economy. As long as those parts of the economy are still chirping, we’re fine.” It looks like those parts are chirping, albeit quietly.

If the economy begins to grow, M&A activity may follow. However, there are no certainties. Although the two trends typically mirror one another, uncertainty has caused a slight divergence in recent months. A resolution to the fiscal cliff before the end of the year could send the two on a parallel path once again.

A healthy Black Friday also points to increased retail and consumer valuations in early 2013. With a nice addition to the bottom line, many businesses will be valued higher as a reflection of their Black Friday success. Combine the increased revenue with the low demand expected in early 2013 as a result of the deal rush in late 2012, and attractive deals are likely to fetch a higher valuation.

In addition to painting an optimistic picture for 2013, the Black Friday numbers also highlight the continuation of a trend that has been developing over the past few years: the gradual shift from traditional brick-and-mortar stores to online retail. With easy access to internet on both computers and smart phones, consumers are shopping in traditional stores, but buying online for the cheapest price.

Even if the trend does not realize significant changes for 5-10 years, the e-shopping trend is still evident. On Black Friday alone, internet sales increased by 20% year-over-year, while brick-and-mortar sales fell by 1.8%. Add that to the expected $1.5 billion from yesterday’s Cyber Monday and online sales are making a sizeable impact. If Mobile Tuesday picks up as well in the coming years, it is not hard to imagine how the momentum will build in favor of e-shopping.

While small brick-and-mortar shops are the most susceptible to losing business to e-commerce, the potential fallout of increased e-shopping could ripple through much of the supply chain. If large swaths of Main Street shops are left bankrupt because of e-shopping, traditional distribution channels will be forced to restructure.

In contrast to piling stocks and maintaining warehouses, e-commerce sites will look for distribution through immediate productions and wholesale distributors. One way to prepare for this transition is to accommodate drop shipping. This approach — in which goods are not kept in stock, but are shipped directly from the manufacturer or wholesaler to the customer — could help ensure that your company is prepared for the increased emphasis on online retail.

It looks like Black Friday this year suggests higher valuations for companies coming to market next year and continued growth in consumer appetite. In addition, as buying patterns evolve, it is important to plan for changes in distribution channels. As we have seen before, the presence of robust and viable distribution channels is a key factor of any successful valuation.