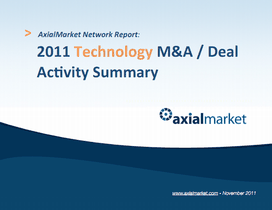 Since January 2011, 978 advisors have researched and brought to market over 2,900 companies through the Axial network. This report takes a closer look at the activity within the Technology sector on the Axial network during that time.

Through the third quarter of 2011, Technology was the second most active sector on Axial representing 18% of all opportunities. 522 companies came to market within the Technology sector, ranging in company size from $0 to over $528 million in revenue, both within the United States and abroad.