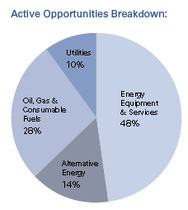 The Energy & Utilities Network Activity Report examines the Opportunities managed on Axial in the first three quarters of 2012. In addition to reviewing this historical data, the report considers real-time data captured on November 30, 2012.

Thanks to Members Alex Koles of Reinvention Capital Advisors and Jeff Pendergraft of Galway Group for their commentary in the report.

Here are a few highlights from the report: